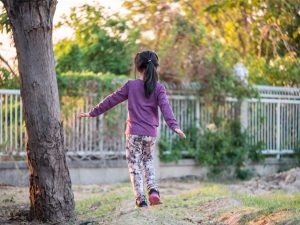 Developmental Coordination Disorder (DCD) is condition that primarily affects children from the ages of 4-11. It is estimated to affect 5-6% of children in this age bracket. Children with DCD are often described as being ‘clumsy,’ and display awkward movement patterns. These children will often bump into furniture, have poor writing accuracy and difficulty concentrating.

For a diagnosis of DCD to be made a child’s gross and fine motor deficits must be limiting their ability to complete age-appropriate activities of daily living, for example being able to button a shirt or tie up shoelaces. In addition, the symptoms must not be otherwise better accounted for by another conditions – e.g. Cerebral Palsy. The DSM-V guidelines are used to diagnose the condition.

DCD is usually referred to as a developmental disorder. Children with DCD have difficulties performing complex tasks compared with their typically developing peers. This is due to four main components that is associated with the condition:

These limitations stop children being able to learn and maintain new skills, and be able to apply them to different environment.

Postural control is the ability to keep a person’s centre of mass within their base of support, essentially being able to stay upright and balanced. Children with DCD will often have difficulty with this skill. For example, they may have difficulty sitting in a chair and reaching forward to write which can often resulting in them falling off their chair. Parents and teachers are often at a loss to why a child is unable to maintain sitting balance, especially if they are able to do the task elsewhere. Environmental factors also contribute to the ability of a child with DCD to perform a skill. For example, if there are lots of things happening in the environment – children running around or low lighting can increase the environmental demand. In addition, if the child is feeling stressed or anxious this may make the task more difficult for them to complete.

Decreased sensorimotor coordination and visuospatial processing refers to difficulties with knowing where self is in relation to the environment. Children with DCD usually have decreased joint position awareness (referred to as proprioception), and an overall poor perception of where their limbs are in space. Often this will be displayed as children crashing into furniture or walking into doors/walls. It also leads to difficulty recruiting appropriate muscles for particular tasks, for example, recruiting hip stability muscles for hopping or running, or recruiting appropriate finger and hand muscles for fine motor tasks such as writing. Compression and vibration through joints, such as jumping for the lower limbs and drumming tasks for the upper limbs, has been shown to increase joint position awareness and therefore increase the brains ability to recruit appropriate muscles.

The final limitation that children with DCD face is the automatization of tasks, for example being able to quickly backstep to prevent a fall, or being able to move their hands to shield the face quickly if a ball is thrown towards them. For children with DCD, the skill of catching indoors does not necessarily translate to being able to catch outdoors. Children with DCD require repetitive task practice in different postures and environments to acquire and maintain skills.

There is some thought that DCD resolves independently overly time as children mature, however a follow up study has suggested that the functional limitations can remain into adolescence and early adulthood. Physiotherapy can help support children and families with DCD to implement strategies to increase postural control, joint position awareness and movement strategies which allow children to be supported with their motor skill development and learning.